Skip to primary content
We arrived in Little Rock, Arkansas and it rained almost the entire time.  We were able to visit several times with long time friends, Darlette and Tony Ellis.

The campground we were in was on the banks of the Arkansas River, literally across the river from the Clinton Library and within walking distance to downtown Little Rock.  We had a view of the Little Rock skyline, but it was gloomy and rainy. 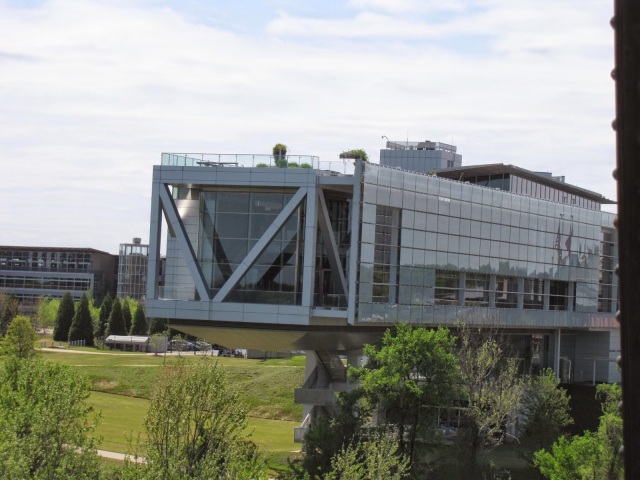 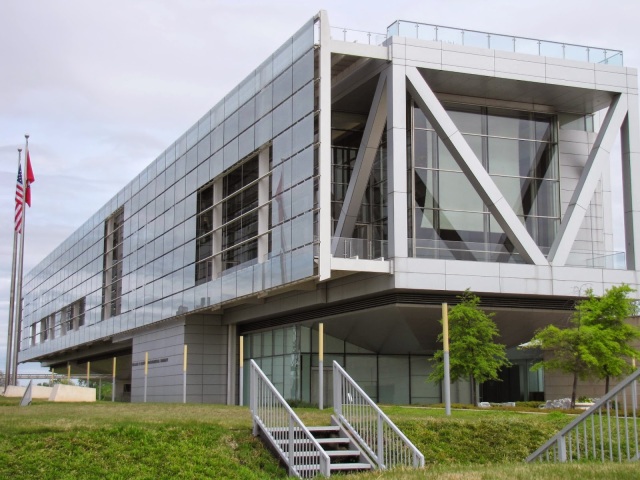 We walked across the Arkansas River on the Clinton Presidential Park Bridge and visited the Library and had the opportunity to view full-scale replicas of the both the cabinet room and the Oval Office.  Regardless of your political persuasion all presidential libraries are fabulous and provide an excellent educational experience. 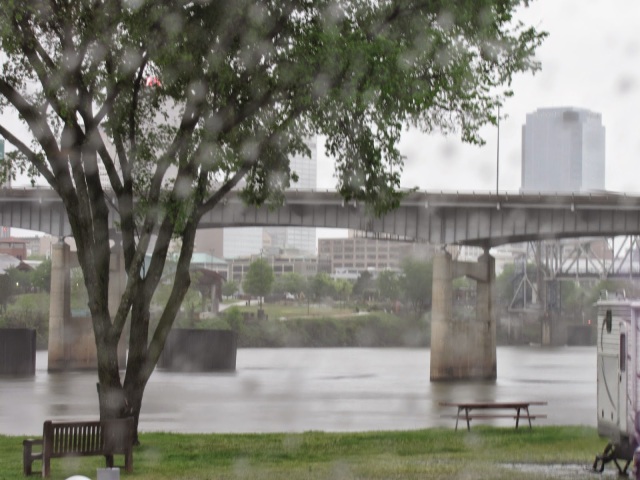 Finally, a pretty day to walk on the Clinton Presidential Bridge 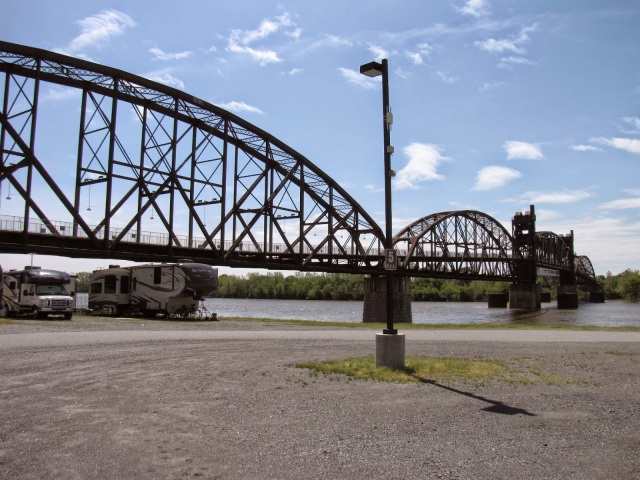 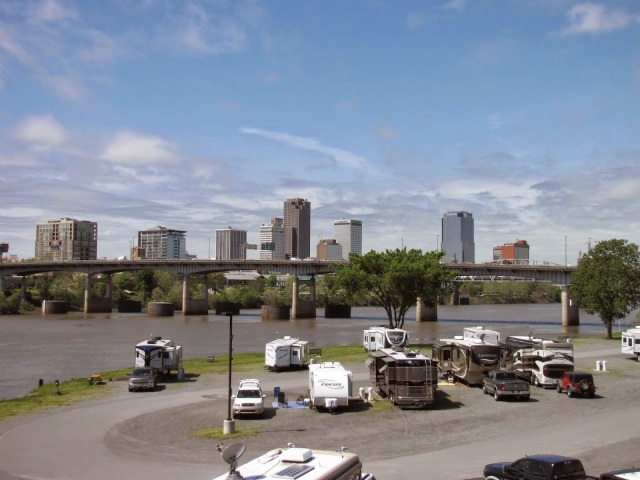 View of Little Rock’s Skyline from our campground.  Can you find our fifth wheel?

Beautiful flowers adorn the bridge.  Kelly Williams, please let me know the name of these please? 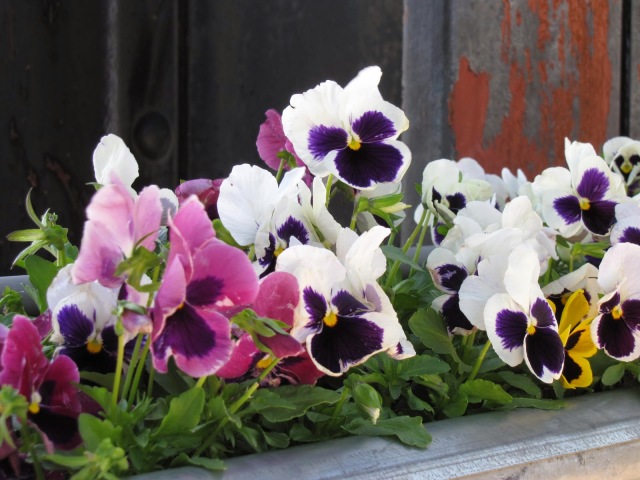 As you might know, from 1979 through 1996, John ran the Plumber’s Union in Miami and thus, was and continued to be heavily involved in politics until his retirement, two years ago.  As for me, I have always tried to remains a bystander.  Regardless, I would like to share a very personal experience, which occurred a year after Hurricane Andrew.
Hurricane Andrew devastated many South Florida communities in August of 1992.  On the Thursday prior to Labor Day Weekend in 1993, John and I were out to dinner.  When we returned home we had learned from the babysitter that “some man from the White House”, had called and asked to speak to John Lindstrom. She thought it was a prank call and hung up on the person.  The “man” was Joe Velasquez, the White House Deputy Political Director at the time.   We later learned that he also happened to be my next door neighbor the year I lived in Bethesda, Maryland when I was in the 5th grade.  Small world.  Well, he called again and emphatically stated it was not a prank call and to please give John an important message – “The President of the United States wanted to visit a devastated site in Cutler Ridge and to please call him back because he would be arriving on Monday”.  The long and short of the story is that they were asking John, of all people, to arrange for this to happen, and so the frantic preparations began.  He was asked to provide many things, but the ones that stuck out as most challenging were a flatbed truck with two levels (specifications were never provided nor explanations for its use were given at the time), a Presidential sound system (what exactly was that?), and to make sure the locale was fully prepped.  We were hoping for a quite weekend, perhaps maybe even a small cookout.  Oh well, the weekend became a whirlwind.  For starters, you must understand that most of the contractors who might have had that type of equipment were out of town, as it was a holiday weekend.  The chosen site was a decimated and abandoned apartment building without any facilities.  The grass was incredibly overgrown.  The grass needed to be mowed!!  ALL on a Holiday weekend with only 3 days warning!  He was able to secure the flatbed truck, which we thought was going to be for the President to stand on, but no, it was for use by the press.  He secured a “Presidential” sound system, which only meant, it needed to be reliable.  He had to call I don’t know how many people to secure generators and many, many, extension cords.  The only issue left was to find a yard service who would do the job on such short notice and that soon became a problem, so ultimately, we had to hire our personal yard guy to do the job.  I can only imagine what must have been going through poor Jose’s mind at the time.  He then informed us that the area was riddled with fire ants, so again we had to get our exterminator to do that.
On the day of the event and it was actually rather interesting.  Secret service agents were crawling everywhere scanning for bombs and who knows what else all the while John’s guys carried gas containers to and from their vehicles to feed the many generators they each provided for the electrical needs.  In the end, it all worked out.  Randy and Katrina both had the opportunity to personally ask both Bill and Hillary, a question of their choice.  Randy asked what sport Bill played as a kid while Katrina wanted to know how many rooms the White House had.  It’s interesting what kids think.
Walking through the Library today, the saw the many notebooks containing the Presidential Daily Schedule.  As they were available for viewing, we were able to find the event on his schedule.  It brought back a flood of memories.

Caribbean West Apartment in Cutler Ridge was on the schedule – 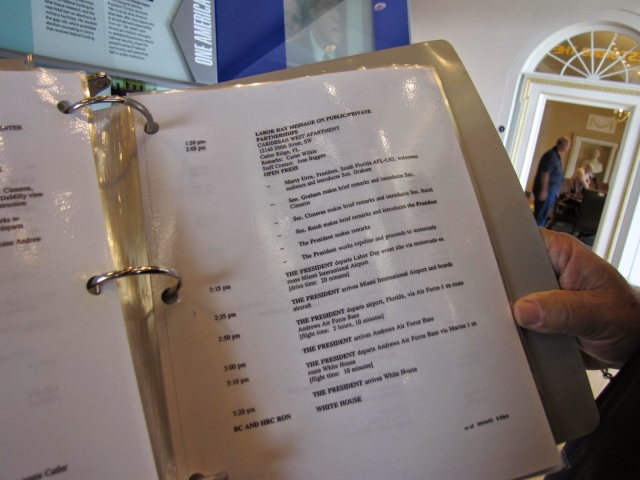 Exact replica of the Oval Office during the Clinton years. 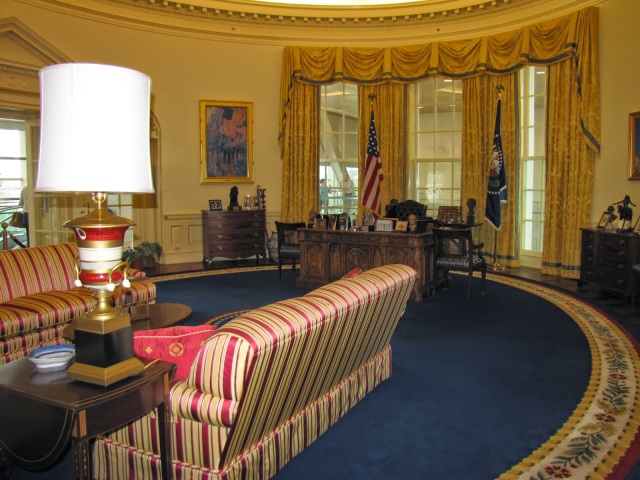 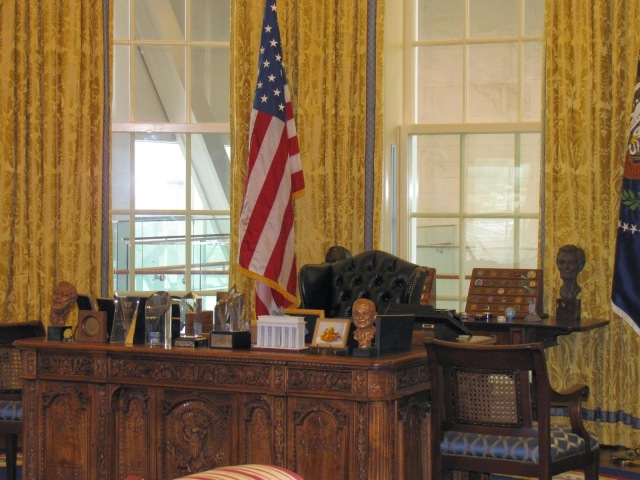 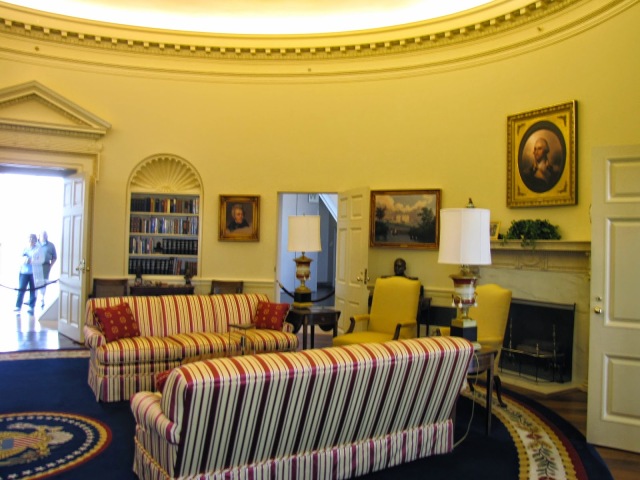 A few exhibits really drew my attention, one was that all the piers were lined with blue boxes.  There are 4,536 blue boxes containing presidential records.  The collection displayed represents approximately 2-3% of the entire collection, estimated at about 80 million pages. 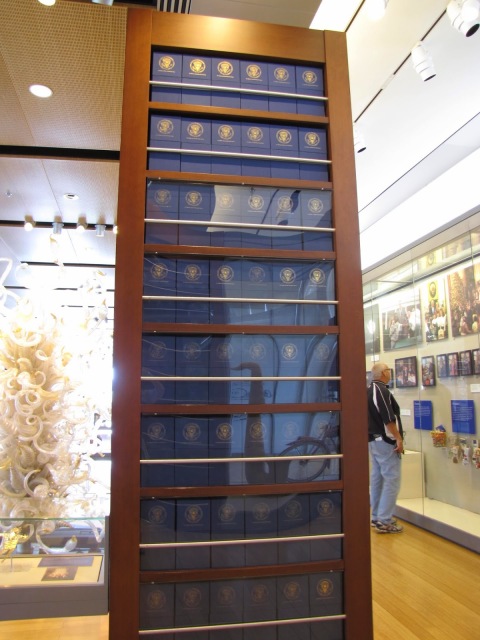 Also, I loved the Dale Chihuly glass tree given as a Christmas present. 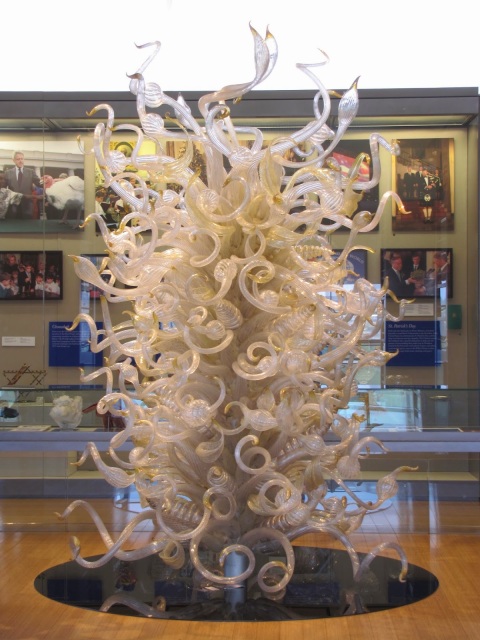 Upon leaving this Library, I told John that I would like to visit all the Presidential Libraries.  So our next one probably will be Truman’s Library in Independence, Missouri.

We then took a drive around town and noticed what I probably would describe as the smallest Benz dealership ever. 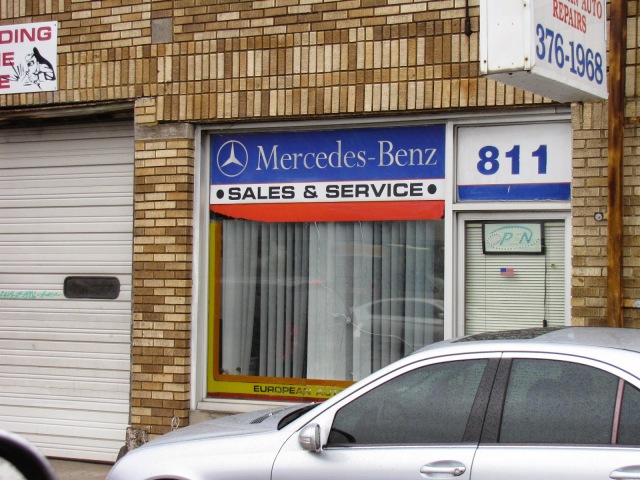 We drove Jackson to Burns Park hoping we could find a place for him to run around.  It is one of the largest parks I’ve ever visited.  It had an 18 hole golf course, 6 baseball fields, who knows how many soccer fields, the same went for tennis courts and even pickleball courts, bike and walking paths, hiking trails, etc.  The dog park was huge, unfortunately by the time we arrived, it started to rain.

We visited the Old Mill at T.R. Pugh Memorial Park, which is an authentic reproduction of an old water grist mill which appears on the opening scene of the classic 1939 film, Gone With the Wind.  The pictures for this just don’t do it justice. 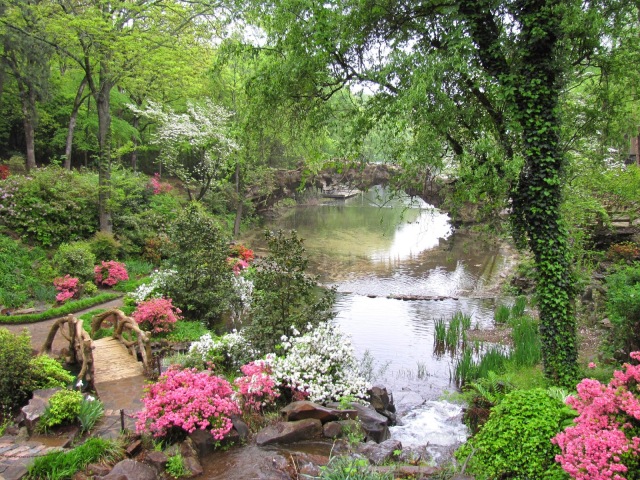 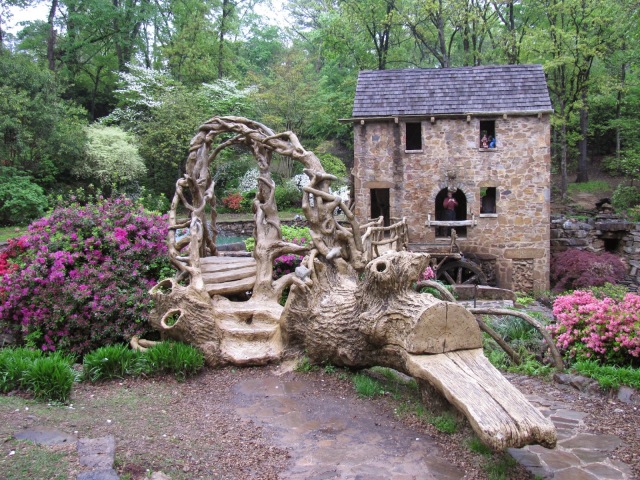 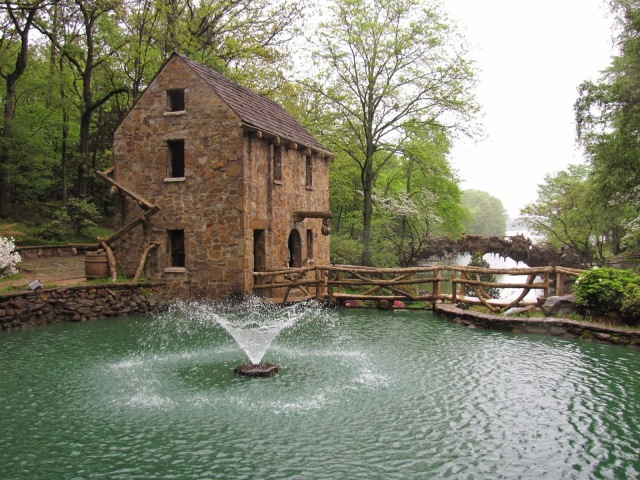 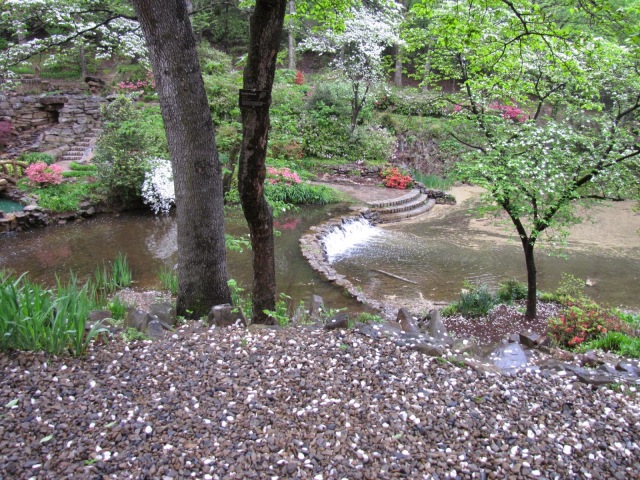 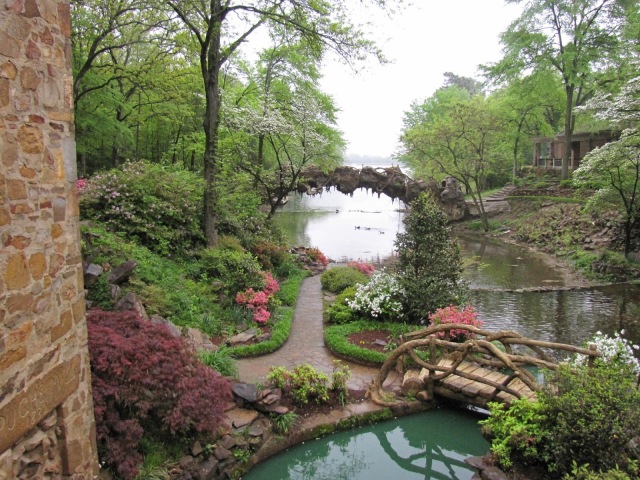 And finally, drove by the historic Central High School – site of forced desegregation during the American Civil Rights Movement. Our friend Tony, graduated from Central in the spring of the year desegregation was mandated.  I found it rather interesting that, according to our friends the Ellis’, both born and raised here, everyone wants to go to Central now. 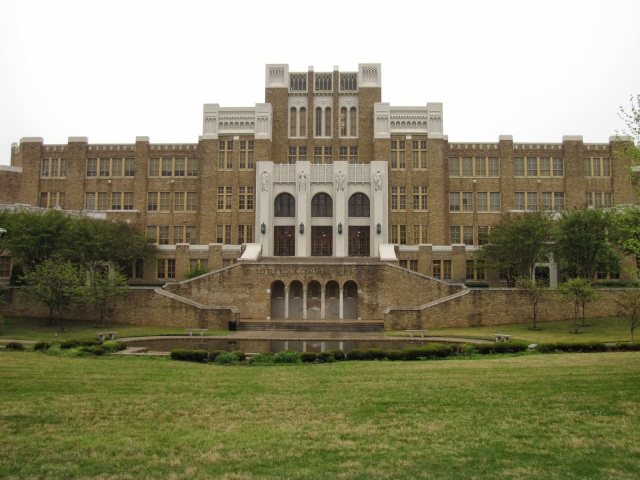